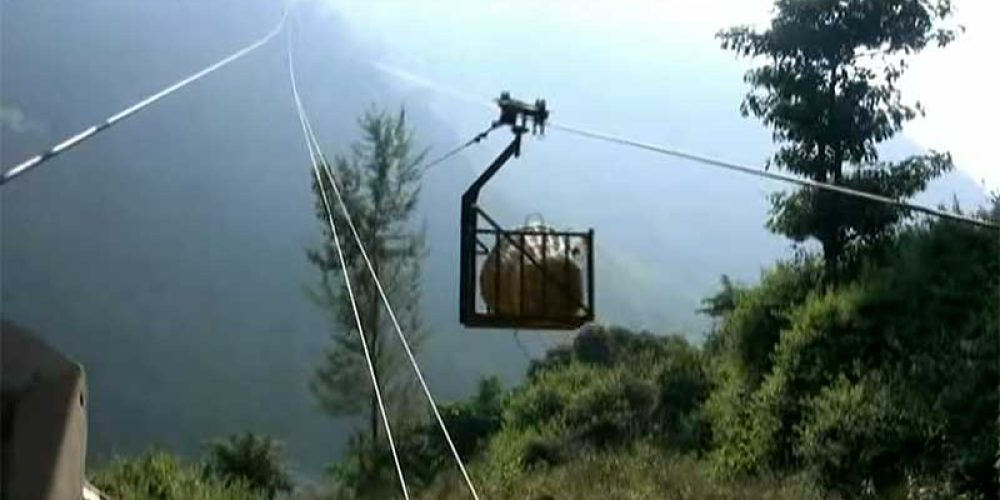 Ropeways have been in use for over 2,000 years in the transportation of goods and passengers. The first usage came from the rugged countries of India, China and Japan. In fact, they were initially referred to as Indian Ropeways. Men used the ropes to cross rivers, ravines and river-gorges by transferring themselves with their bodies suspended by a crude harness.

All that was required to build a ropeway was a rope, knots to secure the rope to a tree or a rock, and an arrow and a bow to shoot the rope across. Ropeways were also used to transport park animals across obstacles within the parks in the early 1850s. These were the early inventions that later lead to more advanced technologies we use today such as elevators and suspension bridges.

Ropeways advancement was initially limited by the strength and length of the ropes as well as the limited power available to convey the ropes. However, with the arrival of wire ropes and new power sources (steam engines and electric motors), the technology got more advanced and more powerful.

Use of ropeways in agriculture

One of the very first applications of aerial ropeways was in the transportation of agricultural products such as fruits, cereals, cotton, and sugar cane. These products were commonly transported from the field to the mill or train station. They were widely used in sugar cane plantations in India, Jamaica and Mauritius for delivering of sugar canes to the crushing mills. In most cases, agricultural ropeways were used in combination with carts.

Today, aerials ropeways are widely used in agricultural factories to transport materials within the factories. Such materials could be anything from raw materials, manufacture’s supplies, merchandise, and products requiring careful manipulation.

As you can see from the above background, the concept of Aerial ropeway conveyance is not entirely new; however, it’s a fairly new introduction in Kenya. One of the companies that have adopted this technology is James Finlay’s Kenya Limited. The company uses Aerial ropeway technology to transport green tea leaves from the field to the factory.

Their aerial ropeway system uses an anchored cable that runs along towers and is powered by an electric motor. The company notes that since the installation of the system in 2010, logistic operations have been smoothed out, security has been enhanced, and they gained huge financial savings.

Apart from ferrying harvested tea leaves, the company also uses the system to transport fuel wood from Kaprotret fields to their factory at Kitumbe in Kericho, Kenya. The company further notes that in addition to cost reduction, the system facilitates better productivity, and reduced damage of the leaf as a result of reduced handling.

Finlay’s has so far reduced the number of Lorries required to ferry harvested tea from 6 to 4 as a result of this system. The company anticipates further reductions in energy costs through electrical and thermal energy self sufficiency to promote long term sustainability and an environmentally friendly operation.

Reuben Langat, the environmental health and safety manager at James Finlay’s expanded on the positive impact of the aerial ropeway technology to the environment and economy of the people around the facility. He notes that the diesel-fueled trucks they use to transport harvested green tea leaves from the estate to the factory emit a lot of greenhouse gasses and dust around the tea fields. This, he says, exposes workers and members of the community to increased pollution.

The construction of the aerial ropeways has yielded direct benefits to the environment. They have been able to use less trucks hence cutting down the carbon emission. In fact, the company was able to reduce their carbon index by 10% within the first year –between 2010 and 2011. Workers and the community around the factory now face less risks of pollution as well traffic hazards. The system has also employed over 50 people and more are now employed in the fields due to the ease of transportation.

Langat also revealed that the project paid itself back within just 2 years of installation and has now continued to yield huge financial benefits to the company in addition to promoting a cleaner and safer environment. The company is currently constructing more feeder streams to the main supply aerial line and they have plans to install even more advanced systems to cover larger production areas.

As a result of financial savings from the use of this system, the company has gone ahead and ploughed some of the profits back into the community by funding construction and improvement of schools around the estate, sponsoring children to attend school and upgrading the neighboring health facilities.

James Finlay’s has also shared information on this technology with other players in the agricultural industry and now a couple of Fresh Flower export firms have picked it up.

Here is a summary of the social and economic benefits of using an aerial ropeway technology.

As you can see, use of aerial ropeway technology is very efficient and beneficial not only to the factories and plants but also the community living around the facilities. Even though this technology is quite old, it has been underutilized in Kenya with just a few companies such as James Finlay’s exploring it. More agricultural companies should be informed and encouraged to pick this up so as to save on their cost of transport and road maintenance, reduce the cost of power as well as improve on structural efficiency.